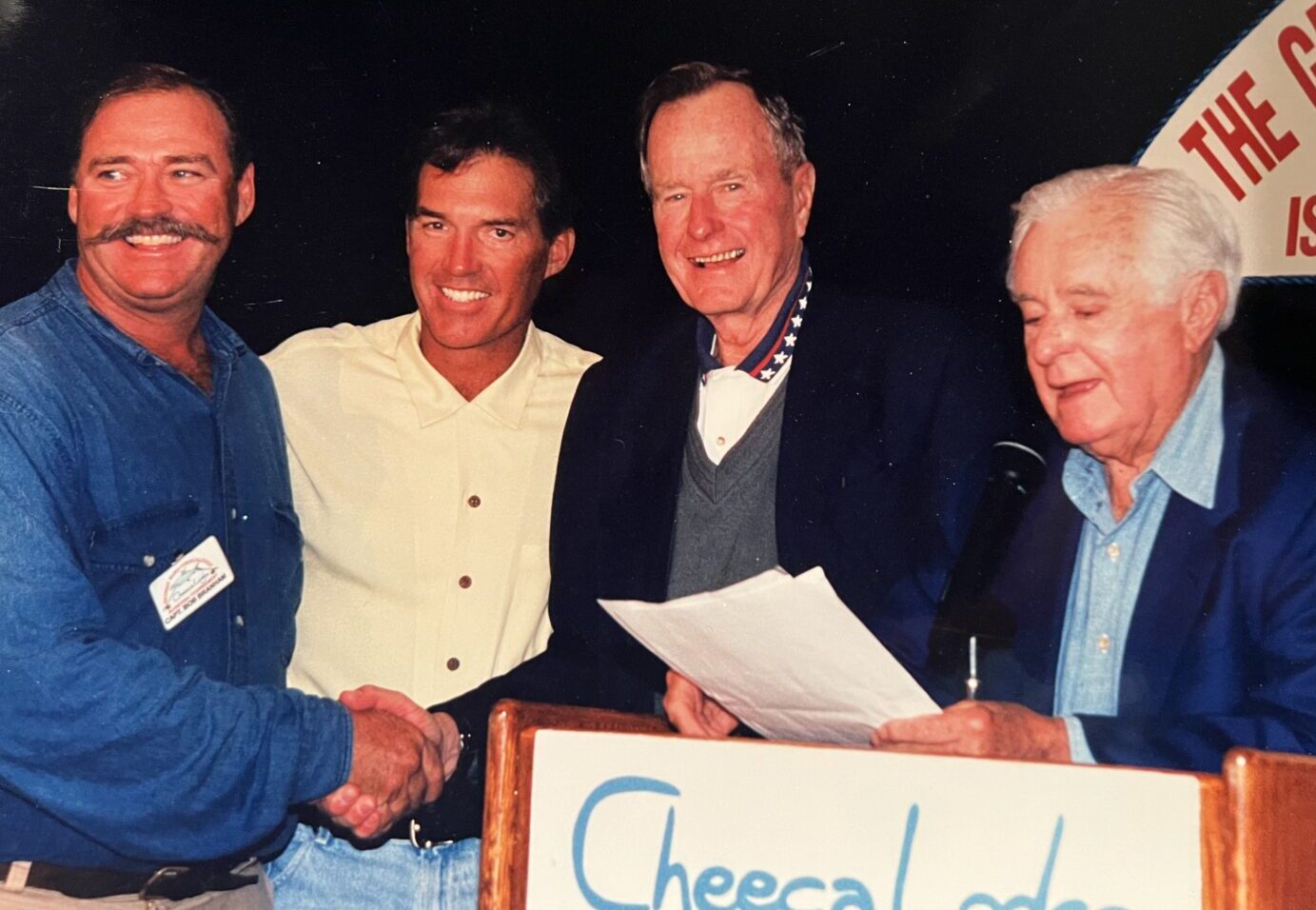 Capt. Bob Branham shakes hands with President George H.W. Bush as Andy Mill hears Curt Gowdy announce them as the winners of the Islamorada Bonefish Tournament. You can hear Andy's interview with Bob in Episode 21 of their "Mill House" podcast. - Submitted

For anglers who aren’t familiar with the podcast done by Andy Mill and his son Nicky, listening to “Mill House” will be a treat. I had listened to the podcasts from the beginning but had gotten out of the habit recently. That changed when a friend kept telling me about the excellent information he was getting from it and how it was helping him be a better fisherman. That led me to the most recent episode featuring an interview with Capt. Randy Towe of Islamorada, a highly respected guide, multiple tournament winner, innovator and the owner of an Islamorada landmark, Islamorada Fishing Outfitters.

While Towe’s accomplishments and contributions to fly fishing were the theme of this podcast, Andy Mill steered the conversation to the legendary (and recently deceased) Keys’ guide, Capt. Billy Knowles, who was a mentor to Towe and always answered his questions by saying, “You have to do your homework, son.” That phrase, which Towe heard repeatedly while he learned the flats of the Upper Keys, was not a deflection but an intentional lesson that paid dividends to him over the years.

I had been a sponge for the Mills’ interviews with the men and women who created the flies and techniques that introduced so many of today’s anglers to fly fishing for tarpon, bonefish and permit. In the episode with Towe, I was gaining a new appreciation for how the Mills are preserving the legacies of these anglers while at the same time sharing the wisdom behind their successes with a new generation of anglers. Nothing could have been more poignant than getting that message and then relistening to the episode with Capt. Knowles.

I was fortunate to have met and fished with Andy Mill and Capt. Bob Branham at the Cheeca Lodge’s 1998 Presidential Bonefish Tournament in Islamorada. That was a fortunate introduction, via Mill, to some of the Keys’ top guides, legends themselves. During the ’90s, through my involvement with the Florida Outdoor Writer’s Association, I was also fortunate to have met and fished with Keys guides such as Nat Ragland, Dale Perez, Jose Wejebe and Stu Apte. I also had the good fortune to meet Joan Wolf, to have gotten to know Lefty Kreh and to have interviewed permit legend Del Brown.

What those experiences taught me was the importance of the information those men and women possess and the significance of the Mills’ work to preserve that legacy, in their own words and with their inflections and humor.

“Do your homework, son.” Those were the words of wisdom that Towe received from Knowles, and he explains in the episode how those words made him a success. More importantly, he eulogized Knowles as the man who made him a better angler and a better man.

Thanks to the Mills, we can still see and hear Knowles tell his life story while experiencing the impact he had on Towe’s life. That’s a wonderful life lesson that resonates far beyond the flats.

How and Why to Release Fish Alive

Suncoast Waterkeeper: Guardian of The Bay