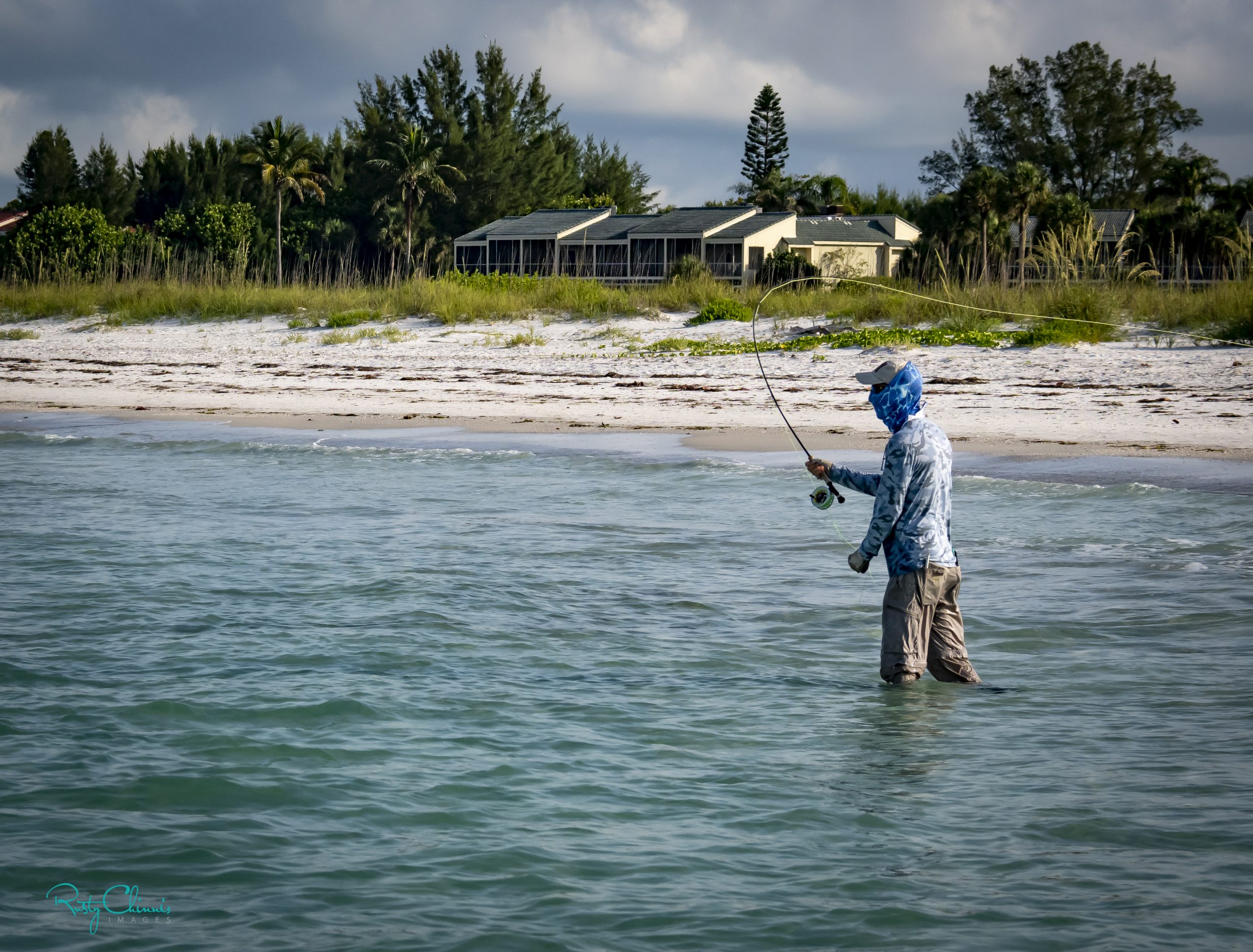 The best place to practice is on grass but real world experience is as close as the beach on a calm summer day. - Rusty Chinnis | Sun
This post is a Reel Time column I write for the Anna Maria Island Sun.

Teaching fly casting has taught me some valuable lessons. Chief among them is the fact that it’s most often easier to learn from scratch using the fundamentals (physics) of the cast than it is to correct bad habits that have been developed over time. That became apparent to me when I gave lessons to someone who had been fly casting for a long time but who had ingrained, bad techniques. When I showed them how to properly move the rod tip in a straight line to form a “tight” wind penetrating loop they understood the concept immediately. The eye-opener for student and teacher was when they tried to repeat the proper casting stroke and their ingrained bad habit overpowered their new understanding.

This isn’t bad news for long time casters who have been using improper techniques but points out the necessity of practice to “reteach” the brain how to move the rod. The same applies to proficient casters who are learning to cast with their non-dominant hand. Try this and you’ll see what I mean instantly. If you’re a right-handed caster, putting the rod in the left hand is like handing it to another being where the mind knows the cast but the body doesn’t cooperate. The good news is that by learning the fundamentals of the cast and practicing them regularly anyone can become adept.

Besides learning and practicing the “Essentials of Fly Casting” it’s important to realize that there is no right or wrong “casting style.” Casting is governed by physics and there are some essentials that every fly caster must master, no matter what their individual skills or styles. This is the difference between the Art (style) and Science (physics) of the cast. Fly casting is a lifelong learning experience that you can practice at 9 or 90. Different people learn at a different pace. Some people pick up casting quickly and then plateau. Others start slow, but when they finally “get it” they’ve “got it.”  It can be compared to learning how to ride a bike. To become a good caster you need to practice, but that practice will reward you with a lifetime of pleasure and provide the opportunity of the company of good friends.

The basic casting stroke consists of the rod being held in the hand at the base of the fingers with the thumb on top of the cork. The stroke is a combination of moves of the wrist, the forearm and the upper arm. In the “ready” position with the thumb on the cork, the wrist is straight and the butt of the rod is at a 45-degree angle to the forearm. The wrist travels from this “straight” position to a 45-degree down angle then returns to the straight position. The forearm and the upper arm complete the motion.

There are five basic movements that make up what is referred to as the “Essentials:”

How to plan a successful fishing trip

Pursuing a developer’s destruction of mangroves

The smelly, fish-killing prices of inaction