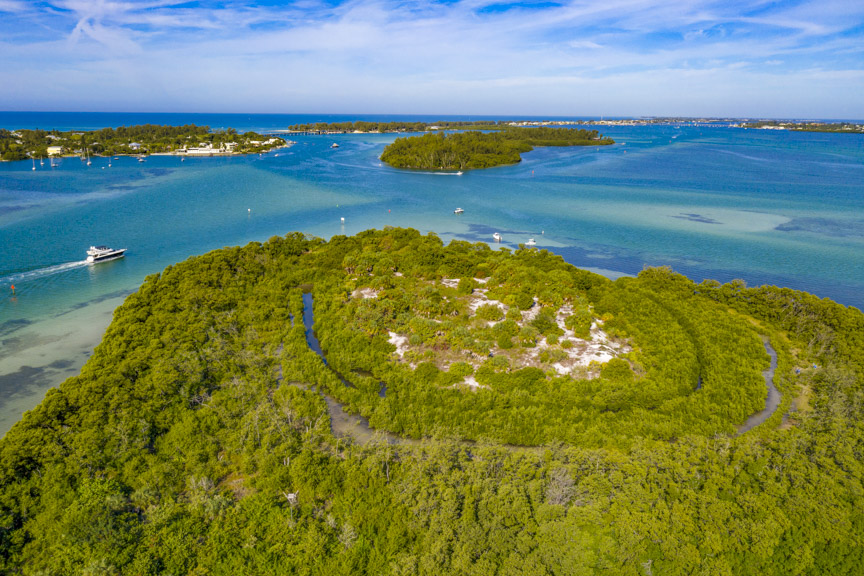 The Sister Keys is a conservation success story.

Suncoast Waterkeeper is teaming up with Sarasota Bay Watch this year when they conduct their Annual Sister Keys Clean up on Saturday, March 6. The event is a collaboration with the Town of Longboat Key and Mar Vista Dockside Restaurant. Volunteers will work for four hours on the island and around the mangrove fringes, collecting trash and recyclable items.

The Sister Keys were slated for development in the early ’60s and were once again threatened in 1989 when they went on sale for $1 million. That spurred a group of citizens to form the Sister Keys Conservancy in an attempt to buy and preserve the islands as a nature preserve. The town purchased the islands in 1994 with a stipulation that the keys would never be developed.

The islands underwent a million-dollar mitigation in 2007 that removed all invasive species, planted native flora and created a 2-acre wetland. Today, mature mangroves dominate the waterways, which are rich with crustaceans, minnows, juvenile fin fish and wading birds. Native species planted on uplands, created with the material dredged to create the Gulf Intracoastal Waterway in the late 1800s, have matured, making the islands one of the best examples of a thriving native marine environment in coastal Florida.

The clean-up is part of a two-pronged, ongoing effort to clean the islands of trash and resurgent invasive species.

Longboat Key’s Marine Division will be patrolling the Intracoastal Waterway to slow boaters during the cleanup. Kayakers and those without a boat will be ferried to the island by volunteers. Larry Begs, owner of Reef Innovations Inc., will once again help the effort by providing a barge in which volunteers can dump their trash.

Back at the Longboat Key Town Boat Ramp, volunteers will load the debris into a truck provided by the Town of Longboat Key. All plastics and cans will be collected in separate green bags, provided by Sarasota Bay Watch, and recycled.

This year, due to the pandemic, lunch will not be served. Anyone not willing to wear a mask for the event or those who are still uncomfortable with groups can still participate during the following week. Through an arrangement with Longboat Key Public Works, volunteers can do a cleanup on their own and deposit bags at the town dock for pickup. A map showing landing areas and trails will be available online at www.sarasotabaywatch.org and www.suncoastwaterkeeper.org.

The Sister Keys Clean Up is just one of many projects that Sarasota Bay Watch is involved in. In 2020. it planted over 750,000 clams in the bay in an ongoing restoration effort. Other cleanups are conducted at various locations throughout the bay and it holds an annual monofilament cleanup, among other projects.

Suncoast Waterkeeper is a Sarasota-based advocacy non-profit committed to protecting and restoring the Suncoast’s waterways through enforcement, fieldwork, advocacy and environmental education for the benefit of the communities that rely on these precious coastal resources. Its efforts have been responsible for major initiatives that hold municipalities responsible for enforcing the landmark 1982 Clean Water Act. Suncoast Waterkeeper also conducts bi-monthly water testing of inland coastal waters.

For more information and to sign up for the Sister Keys cleanup, go to https://sarasotabaywatch.org/sister-key-clean-up-saturday-march-6th-8am-12pm/.

The unfolding tragedy of Piney Point

Focus on the fun of fishing