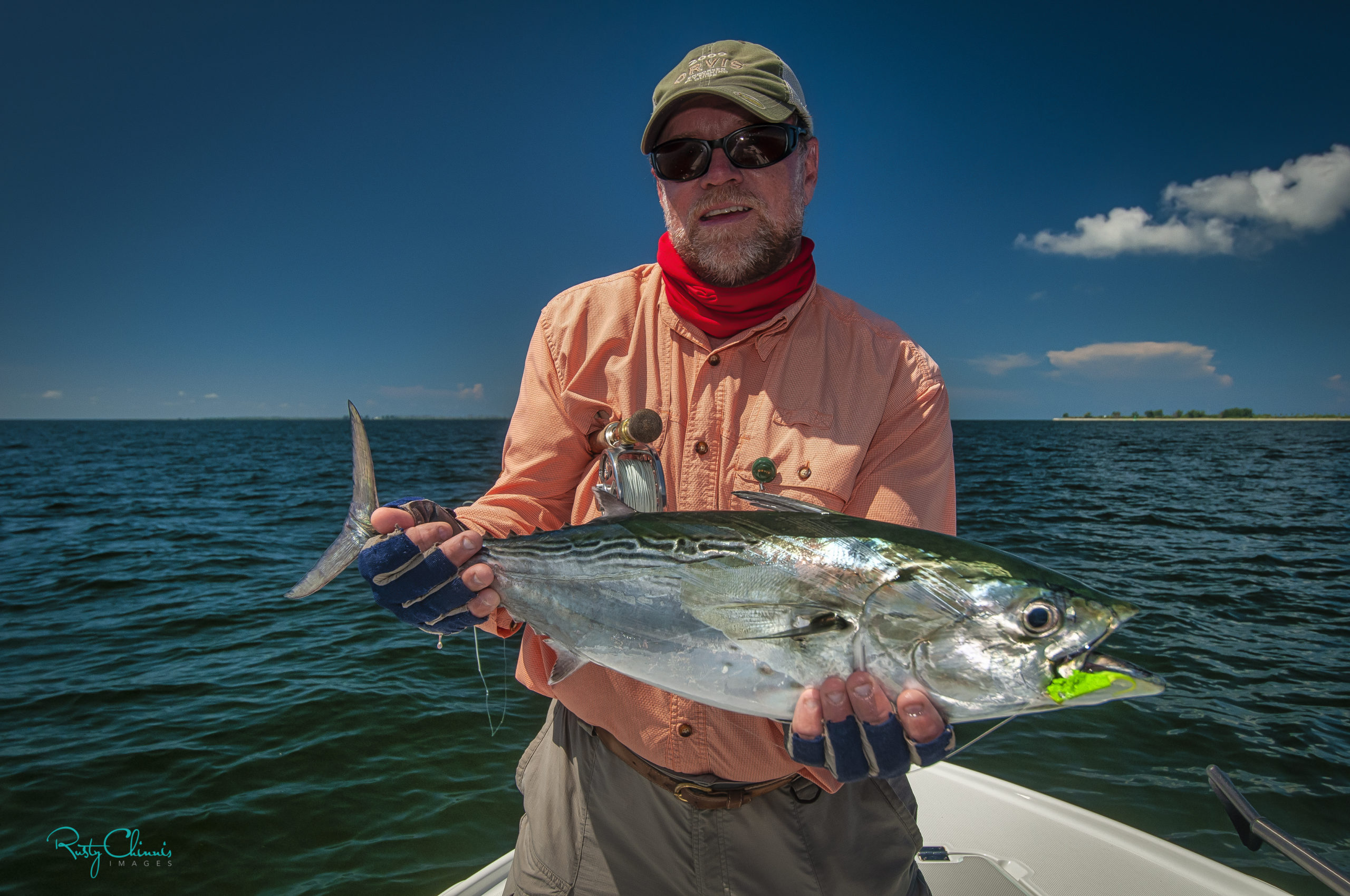 The little tunny (locally known as bonito) is my favorite fish species to pursue. These members of the tuna family are notable for their stamina, long, smoking runs, and their ferocious feeding blitzes.

Shifting seasons bring welcome changes to the Gulf coast. Especially welcome are the Fall fronts that are the couriers of cooling temperatures and lower humidity. For local anglers, weary of the Dog Days of Summer, these changes are particularly welcome because they mean the arrival of giant schools of baitfish. These tiny fish massing in the passes and along the beaches are harbingers of the king mackerel, cobia, Spanish mackerel, and little tunny that are never far behind.

While I love to fish for all these species, the little tunny (also called bonito) is my favorite to pursue. These members of the tuna family are notable for their stamina, long, smoking runs, and their ferocious feeding blitzes. Best of all, they attack topwater patterns with a vengeance. Targeting these rockets with fins is at once easy and frustrating. They can be found easily when they turn the water’s surface white in a feeding frenzy. Wheeling and diving terns and pelicans signal their general location from miles away.

In the past, the method I used most often, once I found feeding fish, was what was referred to as the “run and gun.” The routine was to run on a plane within casting distance of feeding fish, cut the engine, and fire a cast into the melee before they sounded.

That method worked, provided the angler is ready and can get off a quick cast. Fumble with the line or make too many false casts and the fish are notorious for disappearing and then reappearing where you originally ran from. Bait schools are generally spread over a wide area, and the schools of little tunny appear suddenly, ferociously attack one school and then just as quickly sound and pop up on another school nearby. If they “stay up” long enough, the run and gun works, but they more often bounce quickly from one school to another.

Over the years, I’ve found that the best strategy when the fish show only for a short time is to watch the birds, get in the area they are patrolling, and let the fish come to you.  I can’t emphasize enough the need to make a quick cast, which will vastly increase your odds of a strike and hookup.

Another method I’ve used over the years to entice fish to the fly (this works great with Spanish mackerel) is to get in an area where there’s action and slap the fly on the water and rip it off repeatedly before making a presentation. The disturbance on the water attracts feeding fish and can be very effective on the edges of bait schools when fish aren’t showing on the surface.

Little tunny can be caught on fly and spinning tackle as well as live bait, but I prefer to fish them on fly with topwater patterns. I use an eight-weight outfit with a 10-12-foot tapered leader and a 30-pound fluorocarbon bite tippet. The fluorocarbon leader sinks, which may seem counter-intuitive with a topwater pattern but that actually creates more surface disturbance with the gurgler and crease flies I like to use.

Little tunny don’t have sharp teeth, but the 30-pound bite tippet provides some protection from Spanish mackerel, which often are mixed in with the feeding fish. Early or late in the day, when the sun is low, and on cloudy days or in turbid water, a 40-pound bite tippet will provide a more robust defense.

As I write this column, a front has blown in with 20-plus mph winds and cool temperatures. By the time you read this, conditions should be perfect. But don’t wait too long – when water temperatures cool significantly, these schools of fish will move south pursuing migrating baitfish.

The Madison Valley and Yellowstone