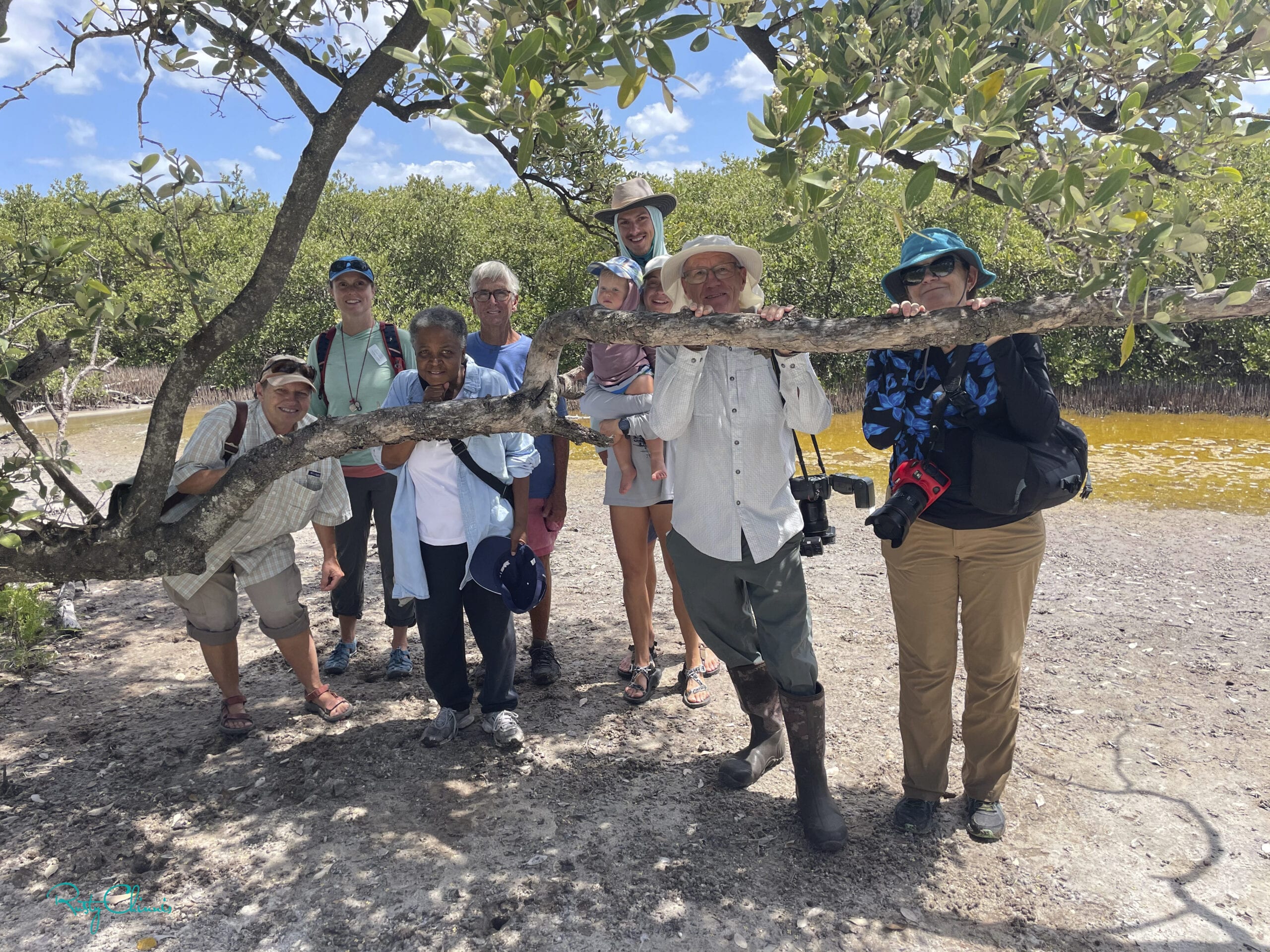 The 'bioblitzers' take a break with the support of a Sister Keys mangrove. – Submitted Photo

I’ve always been a big fan of Sarasota’s Selby Gardens and the work it does in the community and beyond. As a member, I stop by frequently to photograph the amazing collection of orchids they display and to decompress in the beautiful and ever-changing gardens. That’s why I jumped at the chance to help facilitate a “bioblitz.”

The endeavor is part of the Sarasota-Manatee Ecoflora Project to document plant occurrence and diversity in the two-county area. On Sunday, May 23, 11 volunteers from Marie Selby Botanical Gardens joined me to do a “bioblitz” on the Sister Keys.

I ferried Selby leaders Elizabeth Gandy, Anastasia Sallen and seven volunteers to the island in two trips, thanks to the loan of a larger boat from Longboat Village resident Mark McBride. We started on the northern end of the key and walked south on paths created to control invasive species and clean the islands. We were lucky to have butterfly and insect experts with us. Delia Smith, director of conservation for the North American Butterfly Association, and John Lampkin shared their knowledge freely with participants. Notable insects included a remarkable number of courting great southern white butterflies (Ascia monuste) and mangrove buckeyes (Junonia genoveva) that flew erratically among the black mangroves. Lampkin also identified and photographed insects including horse guard wasps (Stictia carolina) and the aptly-named mustached tiger beetle (Ellipsoptera hirtilabris) which is reportedly declining in numbers.

Lampkin also captured a “live-action” image of a sand wasp (Bembix americana spinolas) digging a nest. Lampkin noted that the sand wasp will revisit that nest many times, bringing in up to 21 flies to feed a single larva.

Lampkin pointed out that while we know the value of the mangroves and wetlands on the Sister Keys, patches of semi-open apparently “bare” sand are just as crucial for these insects as well as sand fleas, mosquitoes and midges. These uplands were created when the first phase of the Intracoastal Waterway was dug in the late 1800s in order to get vegetables from local producers to the Tampa market.

Notable plants documented on the outing included a rose gentian (Sabatia spp.), gopher apple, (Geobalanus oblongifolius), and saltwort (Batis maritima) in full flower. The saltwort is dioecious, having separate male and female flowers, and the blitzers were lucky to observe both! They also saw and recorded perennial glasswort (Sarcocornia ambigua), the host plant for the eastern pygmy blue butterfly.

The morning passed quickly but not before the volunteers had covered a significant portion of the keys. Besides identifying plants, animals and insects, participants picked up trash and identified the location of several invasive plants. If you would like to become a member of Selby Gardens and/or join one of its many outings, visit www.selby.org.

Your Environment is Worth More Protection Than It’s Getting

The Sister Keys prove people can protect the natural world

Reel Time on the Road: River of Painted Rocks