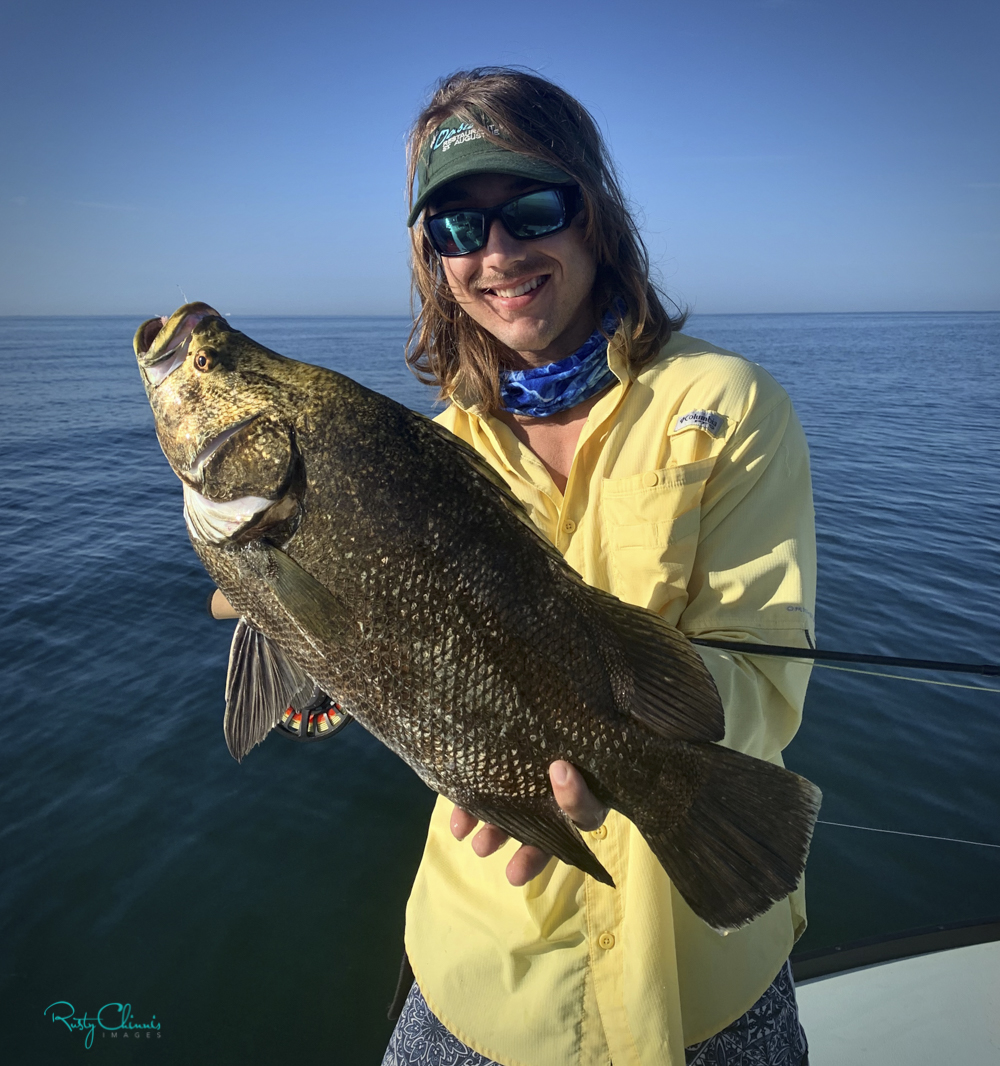 Hunter Parrish landed this tripletail on a bend back shrimp pattern off Anna Maria Island.

I often joke that I took up fly fishing so I wouldn’t catch many fish, and it seems to be working pretty well. While uttered in jest, I wouldn’t suggest that anyone take up fly fishing to catch more fish. Still, I haven’t run into any seasoned fly anglers who decided to go back to fishing with live bait.

Fly fishing is first and foremost fly casting, and that’s what appealed to me – that and the thrill of casting to an individual target and working a fly to fool them into hitting. Adding to the satisfaction of a sight-fished tarpon, redfish or tripletail is tying the fly that fools them. Committing to catching fish on the fly is challenging, no doubt about it, and even the most accomplished fly angler started with the basics and a dose of frustration.

This past week, I had the pleasure of having longtime friends Benny and Hunter Parrish on the boat. The father-and-son duo are both committed to learning the art of fly casting. Hunter recently relocated to Fort  Collins, Colorado, where he’s catching the “fever” on western trout streams. Benny has been interested in fly fishing for years, but it was this past summer while fishing with Hunter in Colorado that he discovered the most important motivation to take it up, a truly compelling reason: the opportunity to share this art with his son.

The day after Thanksgiving, the planned date for our outing, we were greeted with the best weather we’ve seen locally in more than a month – bright blue skies, light winds and clear Gulf waters. We started the morning running crab trap lines off Anna Maria Island as we made our way north toward the mouth of Tampa Bay. About halfway there, we ran across a really nice tripletail lying on its side with its nose right on a crab trap line. Coming off plane, I dropped the trolling motor and headed back toward the float as Hunter got ready with his 8-weight outfit and shrimp fly. The fly was rigged with a weed guard to prevent a hookup on the float or line. Tripletail are ambush feeders and lie on their sides to mimic seaweed that’s often trailing from the floats. Unlike most species, for the best chance of  persuading a tripletail to bite, you need to strip the fly right into its face.

Hunter got a take on the first cast but missed it, so we motored back around for another pass. This time, the tripletail wouldn’t move off the line to take the fly, so I had Hunter make a cast that brought the fly right to its face. Even fish reluctant to feed can’t resist just having to open their mouth for an easy meal. It took a couple of casts but when the fly entered the “sweet spot,” the fight was on.

The tripletail made a strong run when it felt the hook and jumped clear of the water before making another run. It was a team effort as Hunter worked on line management issues as the fish ran back towards the boat and loose fly line wrapped around angler and boat. Our luck held and, after getting the fish back on the line, we were able to land it.

We saw a couple of smaller tripletail that day but were unable to get them to bite. Continuing with our plan, we poled the edges of a flat off Egmont Key, where we found schools of snook. Once again, Hunter was on the bow and made a perfect cast to a group of cruising snook. As the fly passed in front of the fish, one 24-inch snook broke from the ranks and attacked the baitfish pattern. This time, Hunter cleared the line as the snook made its first run and then played the fish on the line, enjoying several strong runs and jumps. We fished the school a little longer, but the tide changed and they lost interest in biting, so we decided to call it a day.

While this was a great day of catching, it had its share of frustrations as father and son both struggled at times with the new tackle. I assured them that every fly caster has had the same experience and it’s sort of an educational “rite of passage.”

It’s what every angler experiences if they are committed to learning to fly.

Threatened Seagrass Has a Trickle Down Effect