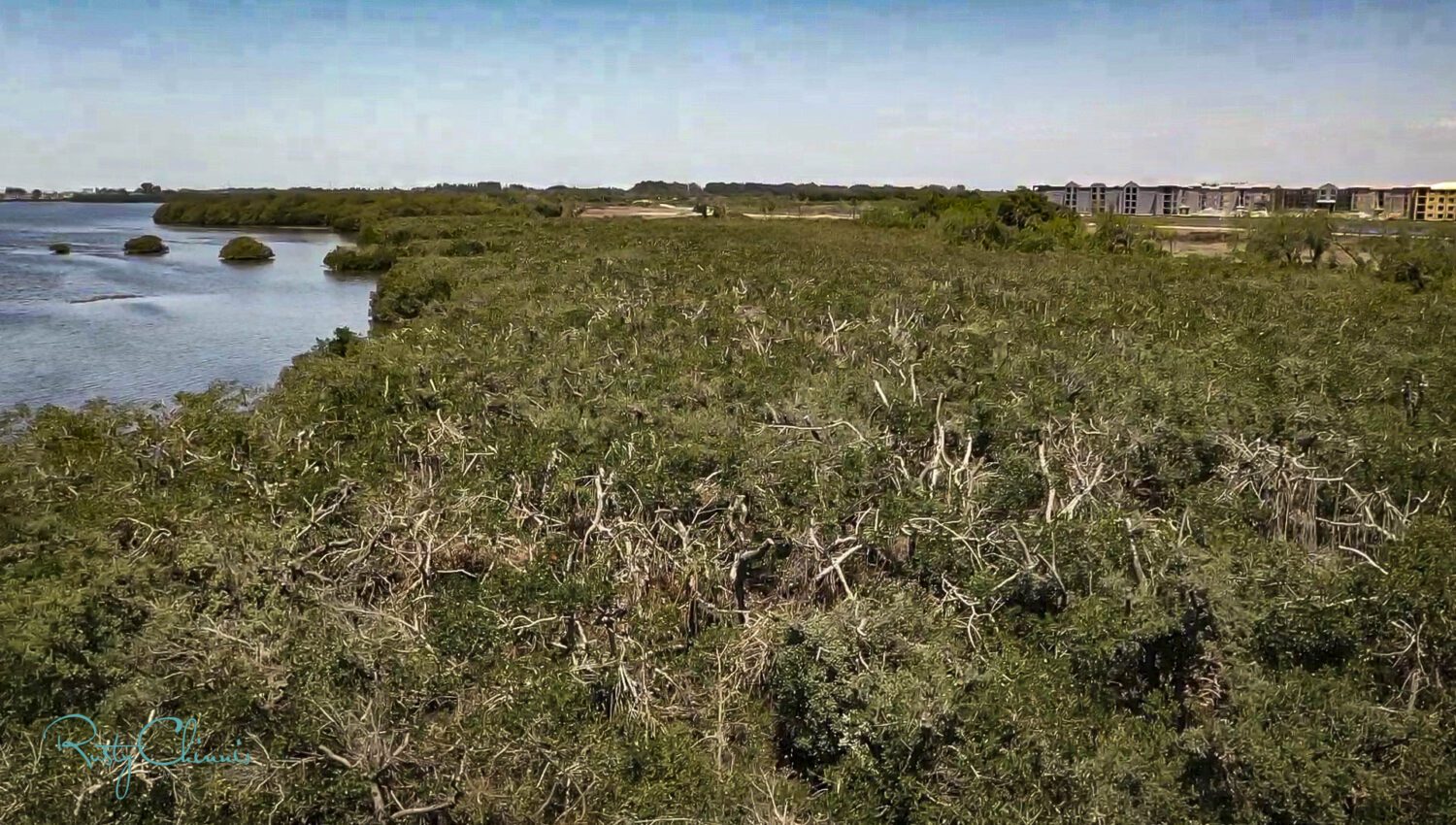 An aerial view of the mangroves west of the Aqua by the Bay development reveals mangroves that have been cut excessively and appear to be dead or dying. - Rusty Chinnis | Sun

People who fish locally know the importance of mangroves.

Intertwined with their twisted roots is a web of life that’s inextricably bound to the snook, redfish, trout, flounder, grouper and a plethora of other gamefish. What can be less apparent to those who don’t spend as much time on the water is the importance of mangroves as a critical source of food and a protective barrier for people.

These ancient coastal forests provide an abundance of food for fish, manatees, dolphins and sea turtles as well as sustenance and nesting areas for critically endangered seabirds. Beyond that, these links in the chain of life provide the ineffable sense of beauty and wonder that continue to attract people to this region, protecting and sustaining a vibrant economy in ways that might not always be apparent.

What’s just beginning to be appreciated is the protection mangroves provide against powerful hurricanes and rising waters that longtime residents have seen firsthand.

With all that mangroves provide for us and our quality of life, it would seem they would be revered and protected at all costs.

Unfortunately, just the opposite seems to be the case.

When local fishing guides began to ask me about what they considered extensive mangrove trimming along the Sarasota Bay shoreline, I went to investigate. What I observed shocked and angered me. On April 4 of this year I flew a drone and walked the shoreline to document what I witnessed. Numerous large, mature mangroves had been cut, were denuded of leaves and appeared dead. A large amount of cut debris was in the water, including branches that were of greater diameter and longer than allowed to be trimmed under Florida Department of Environmental Protection (FDEP) guidelines.

When I reached out to FDEP in April to file a complaint, I was told that Karen Willey, a local environmental advocate and business owner, had filed a protest two months earlier. When I talked with Willey, she said she had seen in the Washington Post an ad for the Aqua by the Bay development that featured an image looking west with an unobstructed view of Sarasota Bay she had never seen before.

When I called FDEP to inquire why no action had been taken, I learned that staff had sent a letter to the permit holder about the complaint and had not gotten a reply. They also stated that they couldn’t get on the property to inspect without permission from the property owner. After raising the issue with state Rep. Will Robinson, Sen. Jim Boyd and the Manatee County Commission, an inspection was done which claimed that the conditions of the permit had been met.

Astonished, I sent an email challenging the FDEP inspection report with images illustrating my concerns.

At her request, I sent GPS-tagged images to Hannah Westervelt, FDEP compliance assurance manager, and was told that inspectors were being sent back to the site to investigate.

Subsequently, Westervelt contacted me to say that two inspections were conducted that confirmed our concerns. The permit holder was given until Aug. 12 to reply to the letter and we are currently waiting for the response.

It’s unfortunate and ill-advised that state regulators are not performing their duty in a timely manner to protect the citizens and businesses of Florida, present and future. But it wouldn’t be fair to lay the blame only with the FDEP. People I have spoken with who deal with state regulators on a regular basis fault former Gov. Rick Scott with eviscerating the FDEP and spawning a mass exodus of its brightest and most committed regulators.

The people I spoke to at the agency, including Westervelt, were responsive to my questions and concerns and ultimately addressed the issue. My guess is the agency is struggling with a limited budget and staff.

That’s where we, the voters, come in. It’s incumbent on the citizens of Florida and of Manatee County to elect officials with proven records of protecting our most important and vulnerable resources.

How this is resolved is still to be seen, but rest assured that groups like Suncoast Waterkeeper will make sure it doesn’t become just a cost of doing business for the developer. I don’t have a crystal ball, but I believe that future developers, builders and your children and grandchildren will judge us for the decisions we make and actions we take.

Reel Time on the Road: Looking back, Paying Forward