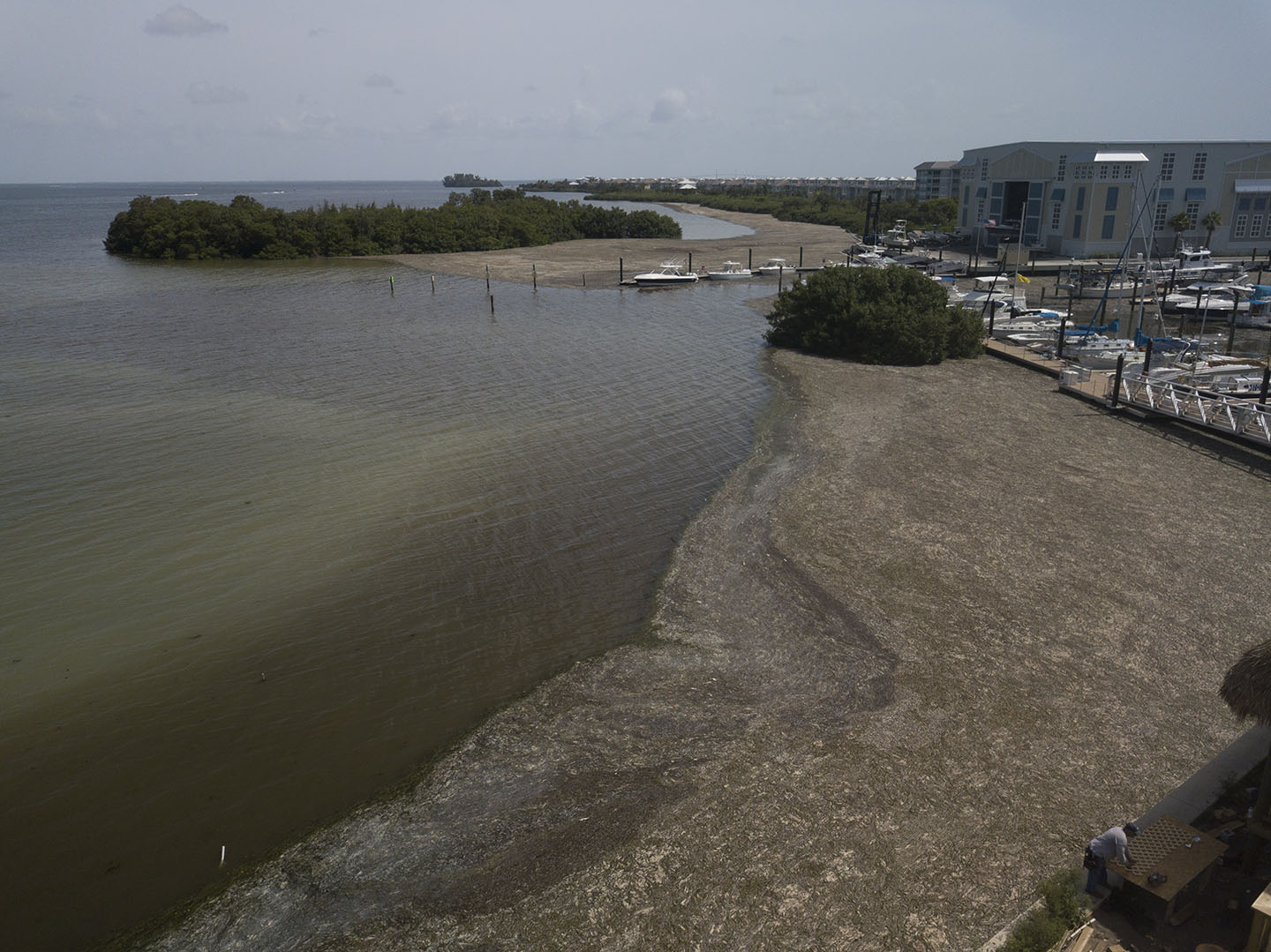 Excess Nitrogen from multiple upstream sources create harmful algae blooms like this explosion of lyngbya on the eastern shore of Anna Maria Sound.

The seagrass beds that carpet Sarasota Bay harbor a tremendous array of living creatures.  This critical and diverse ecosystem is generally out of sight except at extreme low tides. Sea grasses are actually underwater flowering plants that serve a number of important functions. They produce oxygen, bind sediments and baffle wave action while cleansing the water column. Seagrass roots, their leaves, and the epiphytes and micro algae that cling to them, clean water by converting dissolved nutrients into plant matter. Besides giving us clean and clear water, sea grasses are home to the organisms that provide food and shelter for fish, crustaceans, shellfish, and wading birds. They also are food source for manatees, sea turtles and various fish and crustaceans. Because they flower, sea grasses require sunlight and are limited to clear, shallow waters.
Of the 52 species of sea grasses worldwide, only seven are found in Florida.  Three main species are found on Florida’s southwest coast. They include turtle grass (Thalassia testudinum), shoal grass (Halodule wrightii) and manatee grasses (Syringodium filiforme). The historical loss of these species has been extensive throughout Florida. Tampa Bay has lost 81% of its historical sea grasses, Sarasota Bay 35% and Charlotte Harbor 29%.  Poor watershed management (storm water run-off and sewage disposal) dredge and fill operations and scaring from boats have taken a heavy toll on Florida’s sea grasses.
Through the elimination of small, poorly maintained regional sewage systems and the work of organizations like the Sarasota Bay Estuary Program, Tampa Bay Estuary Program, and Tampa Bay Watch, programs were instituted that began to turn the tide on water quality.

Anglers, from experience, are aware of the importance of these prolific, shallow beds. They experience firsthand the myriad interactions that produce fertile fisheries. They may not understand the intricate web of existence that proceeds from the microscopic level to the fish on the end of their line, but they reap the benefits nonetheless. Government scientists (NOAA) consider sea grasses to be of such importance that they have adopted a “no net loss” policy to manage them.  Despite this pronouncement sea grasses remain under assault.
Preventing the loss of valuable sea grasses must be a high priority. Watershed management, replanting, avoidance of direct impacts to existing grasses, and mitigation are avenues to reach those goals. Mitigation involves the replacement of sea grasses impacted by residential and commercial development. Unfortunately the literature reveals that the effectiveness of mitigating seagrass damage is considered, even among the leading wetland scientists, as marginal at best.
In recent years seagrass had rebounded in Sarasota Bay.  Unfortunately, that trend reversed after the red tide of 2018 and now there have been reports by local fishing guides including Captain Justin Moore and Captain Todd Romine that acres of once lush sea grasses have been reduced to sand flats. It is a foregone conclusion that development will continue to impact coastal areas and their seagrass resources. It is vital that decisions are made that will accommodate unavoidable development while protecting the quality of our most valuable local resources. Enlightened citizens, anglers and their interest groups must take part in this decision making process. Cost considerations often eclipse concerns for sea grasses, but research reveals the true value of these resources.   A study (Virnstein and Morris 1996) conducted in the Indian River Lagoon estimated the value of seagrass to be $12,500 per acre, per year, based solely on economic values derived from recreational and commercial fisheries.  In the last few years the effects of rampant development, antiquated and failing infrastructure, and associated storm water run-off are feeding red tide events, algae blooms and threatening the very existence of the bays seagrass system. Groups like Suncoast Waterkeeper and Tampa Bay Waterkeeper, with the Sarasota Bay Estuary Program, alarmed at the prospect of a potential collapse of the bay (like the one that has plagued the Indian River Lagoon) have sprung into action to alert the public through education, effective policy and in the case of the Waterkeeper Groups, hold governments accountable under the rules of the Clean Water Act of 1972.  It is imperative that citizens let leaders know they will hold them responsible to protect the resources that form the basis of our quality of life as well as the local economy.

The things that matter most

A Catalyst for Change